Faires, wizards, and pixies, OH MY!  Welcome, welcome, to our guest this week, Theresa Sneed. In her recent release, Theresa takes us on another adventure in her SONS of ELDERBERRY Series. It’s a unique mystical world with daring adventures and a sweet romance that makes our hearts melt.

In effort to uncover this mystical writer beyond her back cover bio, I asked her to tell us a little about herself and she wasn’t shy.

What are TOP TEN THINGS we should know about Theresa Sneed?

We’re also lucky enough to get a sneak peek inside the covers of her recent release, SONS of ELDERBERRY and don’t miss out below on the free GIVEAWAY. 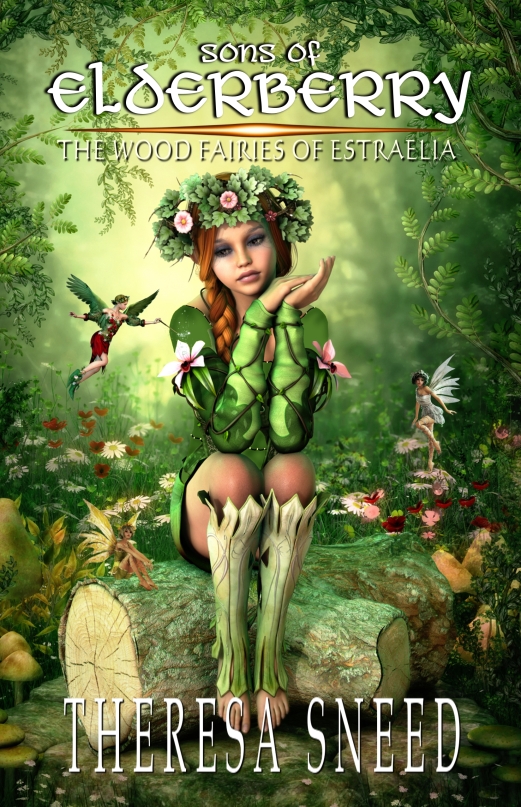 When Elias of Elderberry introduces his best friend Jaron Finley to his magical world of fairies and castles, wizards and yōkai shape-shifters, will Jaron ever want to go back to his dull world of school and homework, especially after meeting Elieli, the fairy princess of Estraelia? It’s doubtful, but he must—the mortal that he is. Will Elias have to alter his memory and erase all that his friend has seen, or will Jaron be able to keep the secret that Elias Rey—a sophomore at PVHS, is a wizard and the youngest heir of Elderberry?

Reviews from Elias of Elderberry, Book One:

Elias of Elderberry is a truly marvelous book! The action, concept, and mysteries contained in this novel are intensely compelling and exciting. Not satisfied with simply writing an entertaining story, Sneed fills the pages with lessons about temptation, addiction, and the morals of right versus wrong. – R.L. Drembic

The Sons of Elderberry! Book One, Elias of Elderberry, was fantastic! I am eager to read the continuing sequels. Do any of us really know who we are and what our real worth is? Fifteen-year-old Elias was soon to discover things beyond his wildest imagination. This is about present day with regular school attendance, yet also, time travel with castles, dungeons, dragons and more! There were many characters well-defined and realistic. Also, the scenes were portrayed very well so the reader was able to easily picture them occurring. My Review of this book offers a Five Stars rating. – LAWonder10

EXCERPT from THE SONS OF ELDERBERRY

In the fairy kingdom of Estraelia, the birth of a fairy is a spectacular event. It happens much like the Merwing, once every thousand years, when hundreds of infant fairies enter their world for the first time. Elieli beckoned for Elias and Samuel to follow her. They slipped away from the feast unnoticed, as the others continued talking and eating Elderberry pie, topped with swirls of white-lemon cream.

“Hurry! I want to show you something.” They followed her through the chamber and on through the ballroom, but instead of leaving the donjon the way the boys had entered, she took them down a long hallway, then up a narrow flight of circular stairs that tightly hugged the castle’s stone wall. The evening sky greeted them, as they neared the top of the sixth tower. Though they stepped out to a spectacular view of the woods and the tiny village far below, it was the stars that stood out the most. The heavens danced, as they twinkled brightly, setting off bursts of energy that filled the sky with gentle fireworks of bluish-white lights.

Samuel pointed to the sky. “What is this? I’ve never seen the stars look like that!”

“It is the Dance of the Fairies,” Elieli said, gazing up at them. “They do look like stars, don’t they?”

Samuel glanced from one shining orb to the next. “They are stars, Elieli. Aren’t they?”

“No,” she said, with a sigh, “not stars.” She looked at the boys then took a small, clear stone from her pocket and held it up to the shimmering display of lights. “Look!” she exclaimed, pointing through the stone to the lights.

“Wow!” Elias said, with a gasp. “It’s hundreds of wood fairies!” He could see them clearly now, even though they were in the sky—lifting their magnificent wings slowly up and down in beautiful, synchronized patterns of dance miles away.